Mitsuru is a character introduced in Brave Story: Wataru's Adventure. He is a Traveler and is Wataru's best friend and rival.

Mitsuru is described to have brown eyes and blond hair. He is said in universe to have a "pretty face". In the movie and game, he has medium-length light blond hair that reaches his chin with dark brown eyes. In the manga, his appearance is less feminine, but he retains his medium-length hair. His clothing in universe normally contains a black shirt with white decorations. In Vision, he wears a white robe with a black robe on top. He also carries a staff from which he collects gems.

In the movie he is described as an intelligent and silent boy. His deep love for his parents and specially for his younger sisters lets him become very reckless, willing to sacrifice everyone and everything (even his own life) to bring them back by getting a wish of the goddess of destiny.

Not interested in something else he refuses to become friends with Wataru and cannot understand why Wataru cares for something else than his own purpose.

In spite of his egoistic attidude he seems to possess some honor helping Wataru in the hospital because Wataru helped him with the bullies.

In the reign of Ildar a very kind site of his personality is shown when he talks to the princess. But it is not sure if that would be his true personality or if he just acts like this to get information of the whereabout of the gem of darkness. Nonetheless he betrays the trust of the princess for the realisation of his wish.

A mysterious young mage traveler with a rather cold and condescending tone toward Tatsuya, whom he meets early on. He is Wataru's best friend. Though he assists Tatsuya for a brief time, he has no intention of being his friend or ally as he has his own agenda regarding the gemstones.

When Tatsuya was separated from the group in the Desert Ruins, he was found by Mitsuru. Mitsuru sees Tatsuya's Traveler's Sword and claimed that he is a Traveler just like him, much to his dislike. Because both of them didn't know the way out and that a magical barrier is preventing Mitsuru to teleport, the two decided to explore the ruins together.

As they explore the ruins, they found the seal that causes the magical barrier. After they unseal the barrier, Mitsuru part ways with Tatsuya.

In the original novel, Mitsuru is Wataru's friend and rival in their quest to get all the gemstones and fulfill their wish. After saving Wataru from his mother's suicide attempt, he offers Wataru entry into Vision.

Mitsuru's father killed his mother and sister Aya, along with his mother's lover after having discovered his wife having an affair. Mitsuru's desire to change his fate is to resurrect his parents, and especially his sister. His will is what originally opened the Porta Nectere in the Daimatsu Building.

In the movie, Mitsuru is a new student at the middle school that Wataru is attending. He first meets Wataru briefly in the abandoned Daimatsu Building after entering Vision. After being rescued by Wataru by a trio of bullies he tells Wataru about the world beyond the doors. He is seen in the movie for brief moments revealing his goals and inner motives until the end where he obtains the Gem of Darkness.

In the Movie he is called a very strong mage. It seems he's able to do nearly everything. After Wataru has been trapped in the magical hospitel, he saved him by breaking the spell. Afterwards he demonstrates his magical superiority with defeating the other mage easily. He even copies the other mage's strategie to control leaves to do so. Then he creates a portal and disappears.

Furthermore he has control over all four elements. Fire - burning down a whole forest, water - creating giant shields and towers made out of ice, wind - blowing Wataru back, creating a stairway made of air, earth - useing a clay doll to animate the earth itself and so creating a giant golem.

Some other spells are shown, too. For example, he is able to create a black sphere around him and after it's gone all people inside of it seem to remain made out of stone. Then he shatters them, so it is not clear if the spell is reversible or not. Another very impressiv spell grants him the ability to flight.

All in all his knowledge concerning magic is tremendous. No other person is shown in the movie that knows more about it. He breaks the spells of others, releases magical barriers and has a spell for every situation. His gems glow before casting a spell.

Even in the 'real' world he seems to possess some magical powers seen when summoning a shadow creature that defeated the three bullies in the Daimatsu Building. Nonetheless it seems he can only use his full power in Vision.

Teenaged Mitsuru in the Manga. 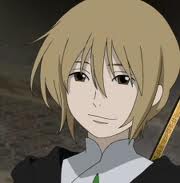 Add a photo to this gallery
Retrieved from "https://bravestory.fandom.com/wiki/Mitsuru_Ashikawa?oldid=4377"
Community content is available under CC-BY-SA unless otherwise noted.