Wataru is the protagonist of Brave Story: Wataru's Adventure. He is a Traveler who was sent to the world of Vision to seek out his wish.

He is described to have short black hair and black eyes with a youthful face that is similar to his father's. In the human world he wears a white undershirt with a blue over shirt and medium length pants. In Vision he wears a helmet with a leather vest, belt, medium length green pants, and open-toed boots. His weapon is a sword with a green hilt and a white guard in which he collects gems. He is noticeably more feminine looking in the video games whereas in the manga he is more masculine and older looking with dyed hair streaks.

In the manga, Wataru is an older boy (14) with dyed hair streaks.

Wataru, along with Meena and Kee Keema, first appeared in Bog - Sasaya Border when Yuno and Sogreth were accused of being the bandits by the Knights of Stengel. The Knight were to arrest them because Yuno and Sogreth are a kitkin and a waterkin, respectively, with Firewyrm Rings. Kee Keema suggested that they arrest him and Meena because he and Meena are a waterkin and a kitkin, respectively, too. Leynart, Captain of the Knights of Stengel, ignored Kee Keema's suggestion for they were wearing Firewyrm bands instead of rings. Then Wataru suggested that they capture the real bandits with Tatsuya to clear Yuno and Sogreth's names.

On their way to find the bandits, Tatsuya and the others saw the bandits stealing from a merchant in the middle of the road to the Bandit's Hideout. As they found the bandits' hideout, Tatsuya, Wataru and Meena were surprised that the bandits were a group of Kitkin and Waterkin triplets, much to Meena's confusion. After they finally caught all the bandits, the Knights of Stengel arrived to arrest the bandits. Leynart apologized for the inconvenience and invited the whole group for a meal, which Yuno ate the most of.

When there as no more reason to stay, Team Wataru departed on their own journey. Wataru can be used when you have completed the game.

Wataru's mom and Wataru's dad are both seen in the film. Wataru is a middle school kid who meets a new transfer student by the name of Mitsuru. He is told by this new student about a world beyond the doors he found before in an abandoned building. After his father leaves his home and his mother collapses he decides to visit this world in order to reunite his family once more. He receives a sword and equipment after entering the door after passing a test from an old mage, saying that Wataru must collect five gems in order to meet the Goddess of Destiny and make his wish.

Wataru on the cover of the Novel. 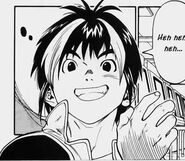 Teenaged Wataru in the manga.

Wataru with his sword

Wataru
Add a photo to this gallery
Retrieved from "https://bravestory.fandom.com/wiki/Wataru_Mitani?oldid=4379"
Community content is available under CC-BY-SA unless otherwise noted.